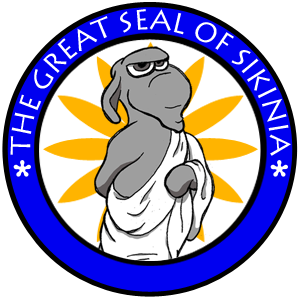 Welcome to The Republic of Sikinia! Below are some facts and figures about our great nation.

Location:
The Republic of Sikinia is neighbored by the Kingdom of Tavaria.
Area:
100,895 square km

The Sikinian Intelligence Agency (SKI) announced the recent firing of an employee from the Cryptology Department.

In the interests of national security, no official details were released. But an unnamed official reported that the employee in question had encrypted a highly secret message using a key based on multiplication mod 29 by 30.

"Obviously not an EMF student," the official reportedly remarked.

President says, "I can 'live' with new budget."

Sikidolfia -- The House today approved a 2.4 billion kulotniks budget for Sikinia by a vote of 2 to 1. The House cuts were largest in the President's defense budget.

President Rufus R. Zamba announced at the Chartreuse Chateau (the presidential summer residence) that, although he was "unhappy" with the House cuts, he could "live" with them.

Tomorrow the House turns its attention to the problem of raising the required revenue to meet the demands on the new budget. A variety of tax plans have been introduced and it is expected that there will be vigorous debate on the House floor and some behind-the-scenes compromising before any tax plan is actually approved. Readers of the Sikinia Daily Tidings will, of course, be kept fully informed on all House actions.

Having approved a reduced version of President Zamba's Administration Budget, the Sikinian House of Representatives has turned its attention to raising revenues to balance the budget.

Leaders of the Blue party are supporting a uniform income tax, entitled Tax Plan I. If enacted, the proposed plan would tax everyone's income at a fixed percent. However, members within the Blue Party are divided on the issue. Some members are backing Tax Plan II, which would exempt the first K1,000 of a person's income from being taxed at all.

As a proponent of Blue Plan II has said, "It takes at least K1,000 per year for a person to live. It's not right to tax someone who earns as little as that. In fact, it is only fair that the first K1,000 of income should be excluded from taxation."

The representatives of the Green party are fundamentally opposed to a uniform income tax. They argue that the doctrine, "tax should be related to ability to pay" means that the rate should increase as income increases, a practice called progressive taxation. While the details of this plan are yet to be revealed, pundits anticipate heavy debating and calculating to settle on a plan that is both "fair" and sufficient to cover the government budget.

The Postmaster General announced new stamps for sending letters, but reminded citizens that envelopes in Sikinia only have space to attach a maximum of three stamps and that exact postage is always required.

He further stated, "We will now be using just three different value stamps. These new stamps cover all of our different postal prices from 1 through 15 Kulotniks".

When the Postmaster General was asked about the value of the new stamps, he was coy and responded, "Sikinian citizens are very adept at mathematics and will easily figure these out quickly".

When pressed about the influence of the upcoming budget cuts, the Postmaster General indicated that only needing three different stamps will save thousands of Kulotniks in the long run.

Regulators began an investigation into The First National Bank of Sikinia, due to concerns the bank is promoting "unsafe banking practices." The scope of the inquiry is unclear, but those familiar with it say an anonymous tip alerted them to many overdrawn accounts. An account is considered "overdrawn" when the customer withdraws more money out of the account than they have in it. When this happens, a customer's account is said to be "in the red," meaning they owe money to the bank.

Regulators would naturally be concerned if large amounts of money are owed to the bank without the proper lending procedures in place. They are concerned customers "in the red" may never pay the bank back and put other deposits at risk.

Typically, banks charge clients a penalty called an "overdraft fee" for overdrawing an account to discourage this sort of behavior. The First National Bank of Sikinia is one of the few banks that does not impose this sort of penalty fee. While the inquiry is still in its initial phase, the bank's customers are concerned it may prompt the bank to institute an overdraft fee.

Mr. Green, a long time customer of The First National Bank of Sikinia, said, "I would hate an overdraft fee! My account is in the red a bit, but I still need to get money out of the ATM!"

A representative at the bank could not be reached for comment, but readers of the Sikinia Daily Tidings will be kept informed as the investigation progresses.

The highly anticipated Women's Bench Pressing Competition was held this past weekend in the town of Holdingford. The awards ceremony was hosted by radio personality Garrison Keillor, who declared the women of Lake Wobegon winners of the competition, narrowly beating out the women from Sikinia.

The coach for Lake Wobegon proudly proclaimed, "We were able to bench the highest weight, so clearly we deserved to be declared the winners."

Disappointed but not disheartened by the loss to their archrivals, one Sikinian team member commented, "I'm proud of our team's effort! We had a smaller team, but overall I think we had a better showing than the team from Lake Wobegon."

Next year's competition will surely be a hotly contested rematch between the fierce rivals. 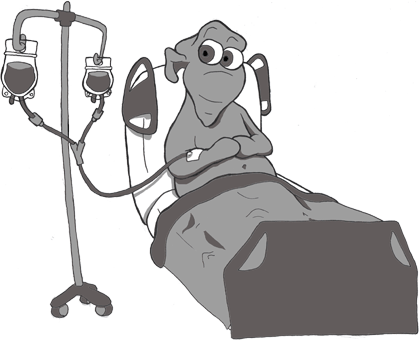 It may be time to switch to a new Virosis drug, as testing is underway on a promising new treatment.

With the development of Drug A 10 years ago, many Sikinians were able to survive the previously fatal disease of Virosis. While Virosis was previously 100% fatal, Drug A succeeded in curing patients 50% of the time. Researchers are now testing a new drug, named Drug B, which they hope will have an even better success rate than Drug A.

The medical team responsible for the development of Drug B touts its advantages over Drug A, which requires expensive production facilities.

"Initial results have been very promising that this new drug may be more effective at curing Virosis," said the lead scientist on the medical team developing Drug B. "Unfortunately, we only have results from 11 volunteer patients."

Critics of Drug B claim further testing should be required before Drug A production facilities are completely shut down.

(Not all districts reporting.)

For more information, please call the Office of Government Surveys and ask for Paul Kopfzähler.